Some of the candidates for the Board of Trustees, the General Assembly Planning Committee, the Nominating Committee, and Presidential Search Committee submitted their own candidate statements. I was able to view those at the time I was voting, but those statements are not included on the Elections page of the UUA website or in the General Assembly Program Book. I absolutely need to know Why Not? I found some of those statements deeply concerning, and I am struggling to get access to them now that I have voted.

I haven’t voted yet (on the candidates) and I would very much like to read those. I have no idea where to find them. Would appreciate a link posted here if anyone has it?

When you go to your ballot on the delegate platform you will be able to see all the submitted statements. Once you have voted, to get access to those statements you can find them and the candidates own websites at Learn More About the Contested Election for the UUA Board at GA 2022

Thank you, I appreciate you pointing me in the right direction. Those statements should be added to the UUA website Elections page along with the candidates’ biographies.

Not only that but I would like for my fellow congregants to have access to the whole statement (including the parts from… the board? that only seem accessible to delgates??) before I vote so they can give me informed input

I also found this on the web. I don’t know if it is from the same Rebecca Mattis that is running but it seems to be? Thought delegates might find it useful as well in coming to a decision about who to vote for. Rebecca Mattis: Critical race theory uses race as a proxy for major issues - VTDigger (I’m still leaning toward voting for her but I am disappointed reading what she wrote about CRT)

Were I a delegate this year, I would be voting for Rebecca Mattis. Not sure about my second vote.

Candidate statements for all candidates can be found here: 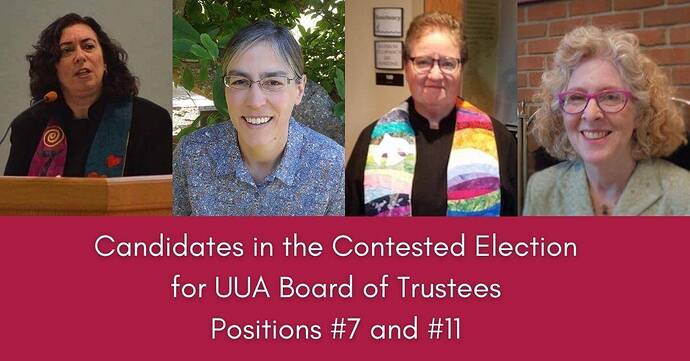 I have voted for Rev. Suzanne Fast instead of Rebecca Mattis.

Rev. Fast has more experience with congregational and associational leadership.

Rev. Fast also has worked to make Unitarian Universalism both more welcoming and more accountable as a leader with EqUUal Access.

I have voted for Rev. Justine Sullivan instead of Rev. Beverly Seese.

Have you voted yet? I am curious why you think someone who wrote something like that should be in a leadership position in an organization striving to undue its own racism.

I didn’t say I thought she should be in a leadership position. I said I was leaning toward voting for the two petition candidates. I fully expected them both to lose by wide margins (which they did) . I read a lot more of what Mattis has written than Seese so I will use her as an example of a small but loud viewpoint that I think should be heard and engaged with. I don’t agree with her. I am a CRT supporter and I hope (try to at least) be an active antiracist. As my son put it, she seems to be one of those people that believes they are not a racist because they “don’t see color”. (my quote not hers) She is not blind so she does see color, what I wanted to know from her was whether or not she believes she has bias? Does she believe most uu’s have bias? Part of our democratic process is having conversations, conversations the board is not having (because they all agree with each other and are a very insular group) and supporting her candidacy was my way of getting that conversation with the board going. (I accidently fell asleep and missed the vote.) Out of about 4800 delegates only about 1900 voted and I think they both got less than 2 percent of the vote. I would very much like to know if they think the process was fair (I believe it was some what weighted against them but was as fair as it could be).

I looked across at the wrong lines, the ones for the abstain percentage. You are correct, 10 and 9, respectively.