Rationale: The Election Campaign Practices Committee creates rules and guidelines for UUA campaigns, and reviews complaints against candidates for violating those rules. The ECPC is created under Rule G-9.13.10, which defines its responsibilities and authority. There is currently a typo in Rule G-9.13.10 which should be corrected in advance of the 2023 campaign season. This typo, on line 2728 of the current bylaws, references a non-existent section 9.13.6(c) as the standard which ECPC the uses for determining “serious violations” that can lead to a candidate’s removal from the ballot. The typo dates from the changes to the UUA elections process made in 2010, when sections 9.12 and 9.13 were rewritten and renumbered. The following change is proposed to clarify the basis of the ECPC exercising this authority.

2723 (c) If compliance to an adjudicated decision is not implemented by
2724 the stated deadline, the Committee is authorized to block or
2725 remove Association-subsidized privileges from the
2726 candidate’s campaign.

† Clarifies that serious violations of any GA-approved UUA elections rule can lead to removal from the ballot
‡ Removes ambiguous language which could imply that all ECPC determinations would be automatically reviewed by the Board of Trustees. Preserves subsection (d) which allows candidates to request reviews of any ECPC decision if they so choose. Clarifies that removals are the ECPC action which is automatically reviewed by the Board of Trustees.

Would it not be simpler to rewrite lines 2727 and 2728 as Candidates adjudicated to be in serious violation of Bylaw rules under Section 9.13.10(c), which seems to be the actual section in question? screen shot from Feb. 14, 2022 by-laws, which I downloaded in May, below: 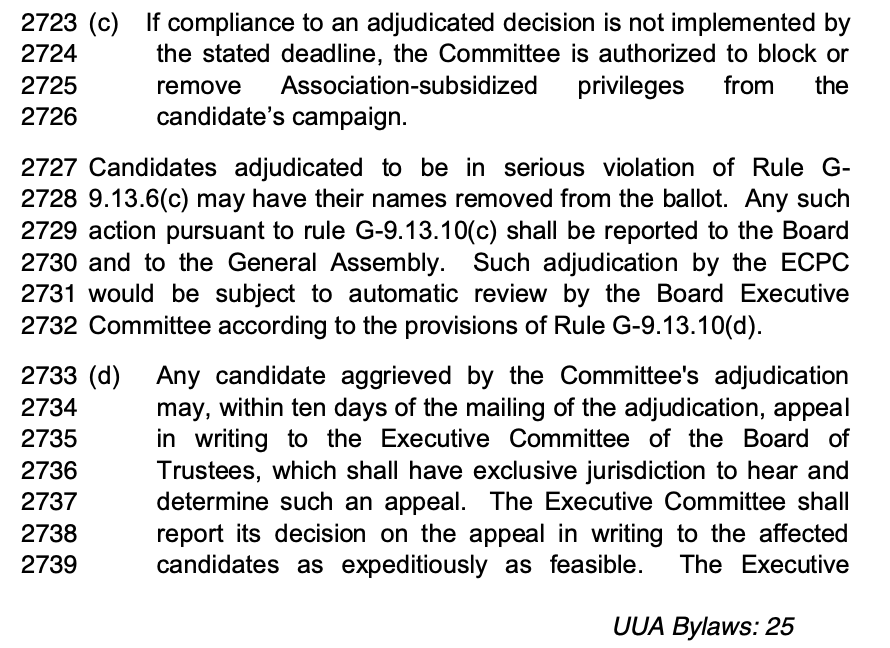 Continue the discussion from [Proposed Bylaw Amendment to G-9.13.10]
All should mean “everyone,” no matter How long it takes it should not be blocked by just a few people

[/details]Freedom of speech prevents BlockingAssocation has no privileges. Do not remove their names from the ballot.

I recommend a No vote on this proposed amendment to G-9.13.10 because this whole section is poorly thought out and needs to be rethought before allowing the ECPC to remove anyone from the ballot. The proposed “correction” of an outdated reference would allow the ECPC to contrive a supposed “serious violation” of the rules in order to remove a candidate who might pose a challenge to the existing political establishment.

In fact that is exactly what I would expect in the current situation where the establishment are followers of Wokism and openly attack anyone who openly defends our 7 principles against the cancel culture of Wokism, such as the two Board position challengers at this GA. And the automatic appeal to the Executive Committee of the Board is pointless when Wokism is required for the entire board, not just the Executive Committee, especially when there has already been a public announcement of the removal. What is really needed is an independent Appeals Court.

In addition, the jurisdiction of the ECPC is not clear. Formally it is about official candidates. But it is being applied to people who are just thinking about candidacy - who’ve not yet been nominated or submitted sufficient petitions. Such incoherence is subject to abuse. In normal politics, fundraising triggers formal candidacy, or the formation of a campaign committee, etc.

Wow, Dick, I’d really like to hear fewer personal attacks from you. It would make it easier for me to hear what you are saying.

The ECPC can already remove people, for no clear reason, since the rules are currently unclear. In fact, AFAIK, they haven’t removed anyone, and there are contested elections this year that include candidates that use similar language to yours.

I may be wrong – just catching up here. If so, I’m happy to be corrected.

Actually, I was recently corrected, and research bore out that the term contested election is not really accurate: it is not a contested election, which would mean that results were challenged, but contested offices/contested seats, which means more candidates than open positions.

I did not name anyone directly or indirectly, so your claim of “personal attacks” is false. As to your interpretation of the current bylaw language, it is clear that any attempt by the ECPC to remove a candidate from the ballot could be legitimately attacked as invalid. That is one reason we need an independent, objective appeals court.

In this case the current leadership insists on an approach to racial justice that is based on Critical Race Theory, which is inconsistent with our 1st, 2nd, 4th, and 5th principles and lacks a track record of success, in contrast to the MLK approach to multiracial unity, which embraces our principles and has an enviable record. In particular, they have recently stated in writing that candidates who support the latter policy (same end, different means) should be disqualified (complaining that the bylaws did not give them the right to vet such candidates).

This, would, of course, be a gross violation of democracy, more like what you’d expect of authoritarian governments in struggling countries. And this is what this seemingly innocuous amendment is really about - it arose after Rev Todd Eklof stated that he was considering running for the presidency of the UUA, a terrifying prospect to many in the current leadership, as it would spell and end to the UUA cancel culture and its subversion of our 7 principles as they were meant to be.

I am not seeing that as a personal attack, more of an institutional attack—no individuals named.

Whether the institutional representation is accurate, I leave for each to decide for perself—I try to walk a middle ground, as I actually do see valid points in both polarized positions. How we find a way forward together that respects all of us, rejects any sort of bigotry or discrimination while accepting conflicting opinions and perceptions is a very hard thing to do—I respect all who are actively making efforts.

As someone who is actively doing anti-racist work daily in my job, volunteer work, church work and volunteer work, I would be one of the people that Dick is constantly denigrating with his use of wokism and other derogatory terms used to suggest that because he disagrees with our understanding of anti-racist work that that understanding doesn’t deserve to be heard or understood. The only attacks I have seen in this forum have been coming from that direction.

Responses to Dick’s attacks have been those of curiosity about where the anger and hurt we hear in his posts are coming from and how folks can help.

As Margy said, I would love to see the discourse about why we agree or disagree with statements and proposals in this forum, not generalized attacks on the staff of the UUA, elected officials and people who volunteer their precious time so our faith runs, or groups of people within our faith.

this whole section is poorly thought out and needs to be rethought before allowing the ECPC to remove anyone from the ballot.

I agree with this. Last year, the ECPC came out and stated, ominously, that the petition candidate was found to be in violation of the rules. This resulted in a huge public degradation, with no opportunity for recourse by the candidate or for the delegates to know what was going on, what the alleged “violation” was, or how the candidate responded to it. . . For me, one who supported the petition candidate, this had the appearance of being an abuse of power by the ECPC to impact voting – that is still my view.

There needs to be much more transparency. For example:

The Board should not weigh in on elections, as it has, this year and last, to support its candidates.

This does not show good democratic spirit, a celebration of the competition of ideas, or respect for others.

The Board already has great influence on the ideological perspectives of the Nominating Committee’s choices. That is too much influence already!

Additionally, I have come to believe that the debate should not be moderated by the ECPC. It appears to be too partisan to me – in the eye of the beholder, perhaps. But it’s not a problem until it is! We need to have some way of ensuring balance. One way might be to allow each candidate to ask a question of all candidates, round-robin style. An additional strategy might be to have supporters of each candidate take turns asking questions.

Weighing in on elections while serving in national volunteer leadership is frequently a topic of conversation. Some feel that leaders should remain neutral. Others feel they shouldn’t have to relinquish their personal voice because they are serving and that not being able to speak curtails their freedom of speech. Yet others feel that their leadership requires them to share their understanding because they have given more time and have access to more information than many of the rest of us.

Leaders making personal statements should be clear that they are personal statements and not in their official capacity. Think about how politicians are careful to keep campaign offices from collaborating with their political staff. Definitely a discussion needed and some collective decisions made.

The candidates’ night did pretty well with this, I thought. Most times they all answered the same question, with one about 4 big controversies in UUism drawn at random.

This business item received significant support and was adopted by the General Assembly. Discussion is now closed.